“Come on. We’ve got to go. We’re going to be late,” I stress to my son as I’m trying to get out the door, drop off at pre-school and get to work by 8:45 a.m. Fatherhood has transformed me from a crawl-out-of-bed-thirty-minutes-before-I-need-to-leave kind of guy to the father who loves to be the first one up, savoring the quite house during morning meditation. But I still often find myself rushing to get out the door on time.

Same can go for trying to keep an evening schedule of dinner, play, bath, books and bed. The other day I was able to leave work early to hand off the baby, so my wife could go to the doctor. I then picked up my son, and he wasn’t in the front door long enough to change from rain boots before he decided we needed to be back outside.

I enjoy the moments when I’m able to take his lead and look at the world through his eyes. God, please allow me to keep this ability for as long as I live. 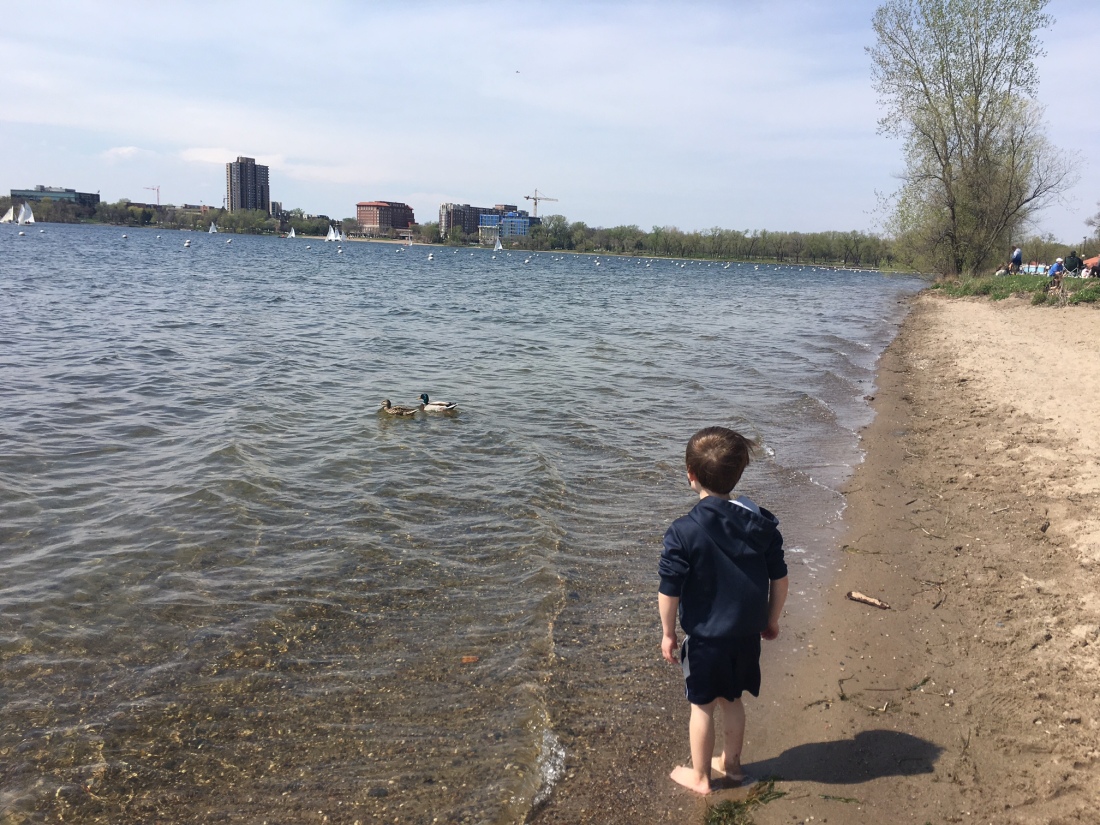 To take these moments and let the grown-up responsibilities of the world fade away. That to me is the gift my son can give everyday. If I keep me eyes open.

The other day we were able to venture to one of the nearby parks. Again, my son’s choice. We had a solid hour before we needed to return to heat up dinner (homemade chili that we had frozen from a previous week). The air was crisp surrounding my fleece but we were fast walking and jogging in excitement for the park.

The park was quiet and soggy. We had the entire place to ourselves. My son took his routes around the equipment while I did box jumps on a bench. I pushed him on the swings. We hunted worms–both drowned and wriggling–in mud puddles.

Hunger started calling me to head home, so I have him the necessary but vague warning that we were going to head back soon. I find it key to warn young minds of upcoming transitions as not to send them into a temper tantrum shock when I “rip” them away from their current play. At the age of four, my son has an admirable attention span that competes with my overactive brain, so it becomes a game of manipulation to exit the park.

Tim Ferriss interviewed Derek Sivers, most noted for his creation of CD Baby, where Derek describes educating his son’s attention span. Derek talks about playing with his son at the beach for hours and hours. Now, I don’t have hours and hours to just float around with my son, but I do try to give him a solid chunk of free play between the end of the work day and the bedtime routine.

I believe free play is good for anyone, especially the young mind, but everything must come to an end. This exit was assisted by the fact that my son had soaked his butt going down the slide, and did I mention we needed light jackets? The guidance I use when the time comes to transition is to reward. Never be afraid to bribe. A little chocolate can go wonders.

My experience is to slow down and let it go. If my son wants to jump on the playground as he exits pre-shool and before I shuttle him home, why should I rush him. I’d rather put off dinner that fight about rushing home.

Because in the end, to where am I rushing off?